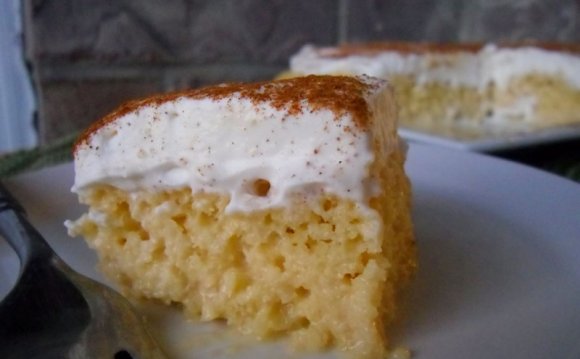 I first made Tres Leches cake about five years ago, when my baby was still a baby and I was trying to find something yummy to make for my friend Ana for her birthday. Ana’s from Mexico and taught me how to make pico de gallo and guacamole, and I asked her what her favorite kind of cake was.

“Tres Leches, ” she said in her sweet Spanish accent.

Ana went on to explain to me what Tres Leches Cake is: a light, airy sponge cake soaked with a mixture of three milks: evaporated milk, sweetened condensed milk, and heavy cream. Yes, you heard me. Some say the cake comes from Nicaragua; others, Mexico. But no matter which Latin America nation invented it, it’s absolutely to die for.

Throw flour and baking powder into a mixing bowl…

And add a little salt. Stir it together and set aside.

Whites in the other.

Now, throw the yolks and some sugar in the bowl of an electric mixer.

Mix on high until the yolks are pale yellow in color and doubled in volume.

Just gently stir the mixture together on the lowest setting, just to combine everything.

Pour the egg yolk mixture into the flour mixture.

Gently stir the mixture together.

Now QUICK! Clean out your mixing bowl and wash the whisk. We need to beat the egg whites and we don’t want to do it by hand because we’re way too lazy for that.

Throw the egg whites into the bowl.

Whip them on high speed until soft peaks form.

With the mixer on high, pour in 1/4 cup sugar. Continue beating until the whites are stiff…but not dry.

Very gently fold the ingredients together until all combined.

Pour the batter into the prepared pan…

Spread the top as evenly as you can get it, then pop it in the oven for 35 to 45 minutes.

Take it out when the cake is no longer jiggly, and when a toothpick comes out clean.

Turn the cake onto a rimmed platter…

And let it cool completely.

Now comes the bad part, which, in baking, actually means the good part. Crack open a can of sweetened condensed milk.

Look at this stuff. It’s so underrated. Sweetened condensed milk is the nectar of the southern states.

Pour the whole can into a small pitcher.

Next. pour in a can of evaporated milk. Not as thick and sweet and creamy as the other canned milk, but still a staple.

To this mixture, add 1/4 cup heavy cream, then stir the whole mixture together. (You can also add a tiny splash of rum to this mixture if you’re feeling particularly naughty.)