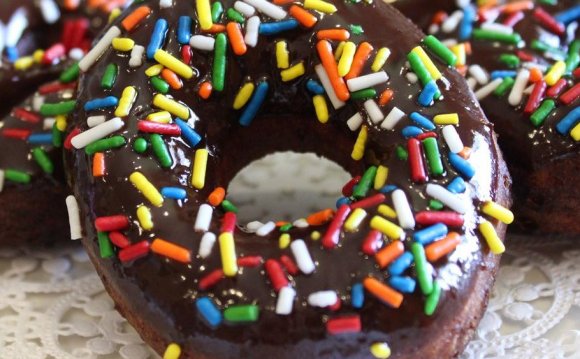 It took several attempts to get a homemade version that is like a Krispy Kreme. As the saying goes, third times the charm. I tried three different types of flour, bread flour first then blend of cake and all purpose flour and I ended up settling on just all purpose. It’s hard to get the exact same texture as theirs because according to the ingredients they have listed online they use emulsifiers, gluten, thickener, firming agents and other additives, which I’m guessing is what gives their doughnuts such a delicate texture. For us home cooks, are we ever going to try and track down all that stuff? With that said these doughnuts are very close, just not identical. Also, my version isn’t as pretty :). The dough is somewhat delicate to work with after the second rise so they didn’t keep their shape perfectly well once I lifted them to transfer to the oil. If only I had one of those conveyer belts like they have at Krispy Kreme. My family and I did a side by side comparison with my version and theirs and both flavor and texture were so close.

If you like a thick coating of glaze, you can make more glaze and double dip them. This recipe could easily be doubled for feeding a crowd. When you eat one of these warm, that perfectly golden, glaze covered edge and fluffy interior just melt away in your mouth. Enjoy!

Homemade Donuts Recipe - in the Kitchen With Jonny Episode 104