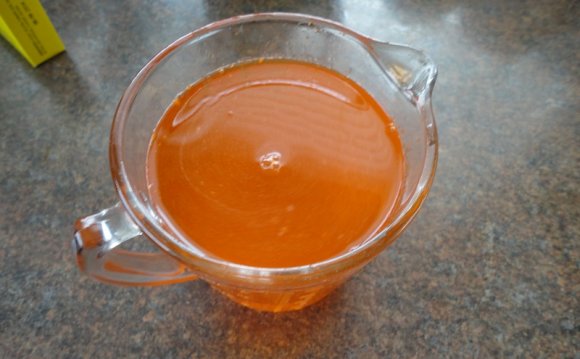 It’s the simple things in life, I tell ya.

Are you confused yet? Because I sure am.

So here’s what happened: I used orange pop instead of lemon-lime pop, and while I thought the finished product was good and all, I didn’t find that it tasted all that different from the original lemon-lime version. It certainly didn’t have an overwhelming, distinctively orange flavor. But then Marlboro Man and my boys sauntered into the kitchen, took a bite of the cake, and declared it one of the best cakes they’ve ever tasted, and they love the orange flavor, and mama, please continue to make this delicious orange cake for the rest of our lives.

Bottom line: This cake is good! Not wildly different from the original, but it’s kind of like choosing between two different pairs of identical-fitting jeans: One with an antique wash, one with a dark wash. It’s just a way to subtly change things up if you’re bored one day!

Add three sticks of butter to the bowl of a mixer.

Yes, I said of butter.

Yes, I said of sugar.

Mix it until it’s all combined…

Then, and I didn’t show this because I’m an airhead, crack in 5 eggs, letting each one mix in before adding the next one.

Halfway through, scrape the bowl thoroughly…

Then mix it again until it’s all fluffy and marvelous.

Add some flour to a bowl with some salt…

And mix it together.

Then, with the mixer on low, add the flour mixture in increments…

Letting it mix in after each addition.

And now it’s time to party.